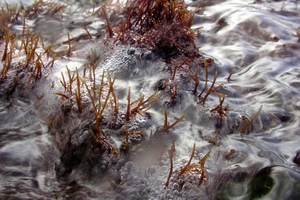 Carrageenan - what do you know about this food additive?

Carrageenan is frequently used as a gelling and thickening agent, and is commonly added to many food products, including processed foods, organic foods, 'natural' foods, and is even added to cosmetics and pet food. Harvested from seaweed, we may be lead to believe that this additive is safe and non-harmful, however recent research has shown this to be far from the truth...

If you are one of the many people that suffer from IBS symptoms, or one of the more serious inflammatory bowel disorders, such as colitis, then even though you may never have heard of it, carrageenan is something you may seriously need to be aware of.

So what is it and what is all the fuss about?

Carrageenan is harvested from a specific species of red seaweed and is used in many different processed food products as a gelling agent, stabiliser, and thickening agent, and is commonly used in milk products, including infant formula, in confectionary, bakery products, soy milk, meat products, dressings, beverages, and even cosmetics and pet food. Worryingly, the addition of carrageenan in organic and ‘natural’ food products has also seen a huge increase. In the UK, because it is harvested from seaweed, carrageenan is classed as ‘natural’, however controversy over its use has existed between the food industry and public health researchers for years, because the side effects of this ‘natural’ additive can be somewhat less than desirable.

In relation to IBS and IBD, nutritional therapy often focusses on the nutritional profile of industrially processed foods, such as high sugar, fat, and salt content, and even though this can play a huge part, we may be missing a trick by limiting the attention that is given to the use of industrial food additives, such as colourings, emulsifiers, enzymes, sweeteners, preservatives, stabilisers, and bulking agents, for example, carrageenan. So with the steady rise of food additives over recent decades, it may be time to seriously consider their use and their safety.

Worryingly, recent research has now shown that industrial food additives, including carrageenan, have the potential to disrupt the gut microbiota (all of the millions of cells that live in our gut which influence physiology, metabolism, nutrition, and immune function), giving rise to inflammation, and immunological and metabolic changes linked to disease development. Adding to this concern is the fact that carrageenan is used in experimental research to actually induce inflammation and inflammatory disease, and yet it is still approved as a food additive! What’s more, reviews and analyses of animal studies where carrageenan has been used, have shown that it induces colonic inflammation, ulcerations, inflammatory infiltrates, and have even shown clinical evidence of colitis.

What then does this information tell us?

Basically, all of the recent research into the effects of carrageenan on the gut microbiota, and it’s possible link with IBS and IBD, point to the potential benefit of the removal of this food additive from the diets of people with such conditions, and the positive effects that may be experienced by the introduction of a carrageenan-free diet. In support of this, research has also been carried out involving individuals with IBS and IBD, showing a positive correlation between carrageenan in the diet and a whole host of related symptoms, and in some cases the complete diminishing of symptoms with the removal of carrageenan from the diet.

Foods that should be avoided in a carrageenan-free diet include:

So if you suffer from IBS or IBD, and have tried every exclusion diet under the sun, but are still plagued by symptoms, a carrageenan-free diet may be worth serious consideration. Carrageenan is required by law to be labelled on food packaging, and is listed as E407, so next time you go shopping make sure to keep a beady eye out for this potentially destructive food additive, and ensure you give your food labels a good, thorough scanning.